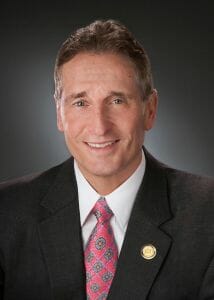 During his tenure as Rochester mayor, Duffy was widely recognized for reducing the cost of government, improving services, lowering tax rates, and attracting millions of dollars in private-sector investments.

Duffy also played an instrumental role on the governor's Mandate Relief Council. He chaired a series of statewide mandate relief hearings, which sought input from local government officials and constituents on the statutory and regulatory burdens faced by local governments and school districts.

In May of 2012, Duffy was awarded the Ellis Island Medal of Honor. The medal honors notable American citizens who demonstrate a life committed to community service.

Duffy holds two degrees from Monroe Community College, a Bachelor of Science from Rochester Institute of Technology, and a Master of Arts from the Maxwell School of Citizenship and Public Affairs at Syracuse University.

Duffy also serves on a variety of boards, including the SUNY Board of Trustees, Co-Chair of the Finger Lakes Regional Economic Development Council, the Center for Governmental Research, Business Council of New York State, US Chamber of Commerce Council of 100, AVANGRID, and others.

Back to Meet Our Team
Scroll To Top